On a sunny Tuesday in October, we went to a high school in Alphen aan de Rijn, Netherlands. Today I was going to do my first pilot of the NEMESIS Lessonseries Co-Creation. I felt excited and a little nervous. What would they think? Will the students dig it?

What I had planned was two groups of 60 students each. Wow, 60 kids lined up to do the Co-Creation. The biggest group I ever taught. Getting them silent was quite of a challenge, but luckily I have a loud voice, so I managed. Then we started with the Co-Creation. After getting to know each other it was time to really start diving into the environment and find the social issues that were bothering them.

To summarise our first day: it was awesome to see so much motivation and drive. The students in the two groups were instantly motivated when they were able to take up the pen themselves and were allowed to bring in their own ideas. They ended up with projects in all sorts and sizes. Every time I witness a process like this I cannot help to feel inspired, motivated and creative as well.

Two weeks later, we came back to see the end results of the chosen projects. We reserved a spot in the huge auditorium where the 60 kids and tables drowned! Haha! Next year we will come back and fill it up with 200 students… When the “market” started and the students started presenting their materials I barely had enough time to see everything they made. The results of the kids were mindblowing. A few went to the municipality and are currently in talks of making parts of the city greener. Action posters to make the streets cleaner were made. The director of the school got invited into a project to “make the school green again”. Vegans were interviewed, students started showering for a shorter period of time and loads more.

All-in all the students ended up becoming more empathetic, more self-and-environment-aware, they worked on their team-cooperation skills and they started to take action to change the world for the better. Just to name a few of the many skills they developed… Funny how doing a lessonseries can turn out. Teaching in a small village somewhere in the Netherlands felt like it made no sense at first. But in the end it turned out to be the inspirational birth of the changemakers of tomorrow. 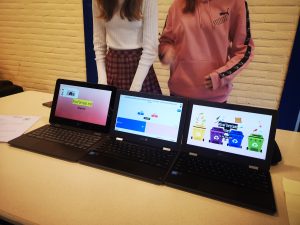 Is there a link between student participation rights and “doing well” at school?